The purpose is to optimize future developments on the site so that we can improve user-friendliness.

“The Hjallerup company has increased the amount of items delivered to the big customer. Today, Toyota has a significant role in the development of the North Jutland subcontractor. The pre-history is that the truck manufacturer experienced difficulties in obtaining the same quality from its subcontractors when producing new product lines. “
This is written in Jern og metalindustri’ newsletter written by Dan S. Frandsen, June 29, 2018. Read the newsletter below: 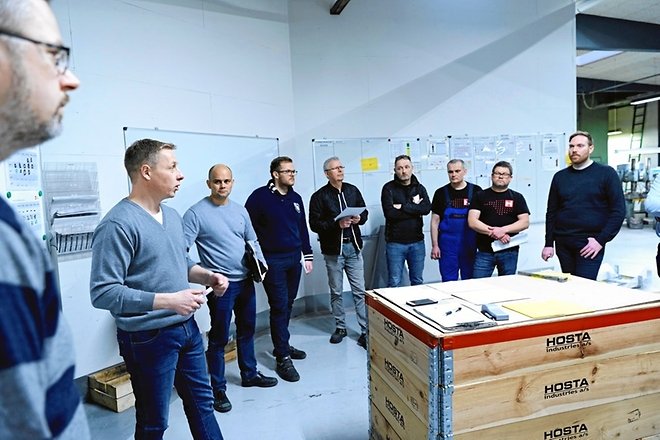 Hosta has built an Asachi area at the Hjallerup factory, where the individual coordinators meet several times a week and go through. Here you can talk about the extent of the individual departments and whether there are internal and external complaints. Photo: Hosta Industries A/S

The Hjallerup-based company has slowly increased the number of items delivered to the major customer. Today, Toyota has a significant role in the development of the North Jutlandic subcontractor. The background is that the truck manufacturer found that it was difficult to get a uniform quality from its suppliers when new product ranges were to be produced.

Therefore, Toyota launched a range that suppliers were offered with the aim that the range should bring suppliers up to Toyota’s standard. Two years ago, Hosta accepted the offer.

“It is a 10-stage rocket in which one goes through the processes from data collection, lean, quality, standardisation and improvements. Toyota contributes as a consultant”, says Christian Mosevang, CEO of Hosta Industries.

Necessary considerations
Hosta has over 1000 different items that they supply to the Japanese group. Some items are produced in large quantities, while others are single items.

“When the offer came, it required some careful consideration to say yes. For one thing, the whole mindset about how to act on a day-to-day basis. We should act as such to all of our customers and not just Toyota, because we take all customers through the same process”, says Christian Mosevang.

Provides eye-opening experiences
After about two years, the subcontractor has reached phase 6. Here it is about standardisation and preventive maintenance of machinery and equipment. The CEO says that there is also a reward in the end.

The partnership agreement also means that the more you progress in a series of steps, the more tasks you have the opportunity to bid for. The components are becoming more and more critical.

“You get some eye-opening experiences. Why have you not thought of that? It is wonderful to work with them as it is not because they say that what they do is right. They also take the input that we have in their organisation.

Toyota makes its services available free of charge. However, Hosta must be committed and provide the people who are needed. So development requires internal resources to adapt templates and standards.

“They look at our factory with different eyes, and they press where we know it is likely to hurt. We try to bring the errors to light. You will not be beheaded if you make a mistake. You must acknowledge the error. It provides an open dialogue and dynamics. We do not only focus on errors”, says the CEO.

Christian Mosevang also points out that because Hosta has grown in terms of employee numbers, it is a strength to have standards. “This is where you need to check, and it is this that is important. It will be described and documented – preferably with photos. It gives time to breathe.

Link to the danish article:
https://www.jernindustri.dk/article/view/609436/taet_toyotaparlob_udvikler_nordjysk_underleverandor?token=rpad4ssu44sgd6v1yfisusp2hje8nhxj